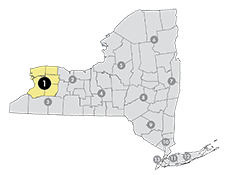 Hoffman has been a member of the Erie 2-Chautauqua-Cattaraugus BOCES since 1989. She has served on the board’s Finance, Ethics and Policy, Personnel and Facilities committees. In June 2009, she retired from the Springville-Griffith Institute Central School District school board after 27 years of service. During her tenure there she served one term as president and two terms as vice president.

Hoffman served as president, vice president and treasurer of the Erie County Association of School Boards. She has also been an active member of NYSSBA’s State Legislative Network since 1989.

Hoffman has volunteered with the Springville Public Library, Partners for Children’s Hospital of Buffalo, the Healthy Community Alliance, the Springville Center for the Arts and Temple Beth Shalom in Elma, NY.

She and her husband Dr. Martin Hoffman, a developmental behavioral pediatrician, reside in Springville. The couple has three adult sons and seven grandchildren.