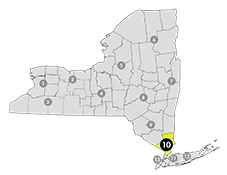 NYSSBA provides advocacy, training and information to school boards in support of their mission to govern the state's public schools. The NYSSBA board establishes policies to supervise control, and direct the business of the Association.

Zugibe has been a member of the North Rockland (Haverstraw-Point) School Board since 1993 and has served as both board president and vice president. She has also been on the Rockland BOCES Board of Education since 2008 and has served as both vice president and president. She was also president of the Rockland County School Board Association for two years and chaired the Hudson-Long Island Coalition for Responsible State Funding of Education for 9 years.

In 2000, Zugibe received the Mid-Hudson School Study Council Award for Excellence in School Board Service and was presented an EDDY Award for outstanding educational service from the Rockland County School Boards Association in 2004.

Zugibe has a bachelor's degree in teaching the speech and hearing impaired from Mercy College and a master's degree in special education from the College of New Rochelle.

Zugibe and her husband Tom reside in Garnerville and have four children.