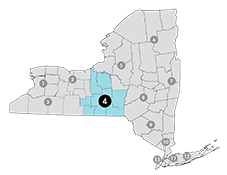 Ruffo has been a school board member since 1985. She is serving her 17th year as president of the Broome-Tioga BOCES board, of which she has been a member since 1995. She currently chairs the Audit, Policy, and Board Retreat/Goal Planning Committees.

Ruffo served on the Susquehanna Valley School Board for 18 years, 15 of those years as president. In 2015 she received the first "Friend of Education" Award from the School Administrators Association of New York State (SAANYS). She also received the Susquehanna Valley Distinguished Service Award in 2003 and the Rural Schools of NYS Appreciation Award in 2019.
Ruffo is a past president and vice president of the Broome-Tioga School Boards Association.

Ruffo is a retired RN, having served in various capacities at the Hospice at Lourdes in Binghamton, including as interim executive director, clinical coordinator, coordinator of marketing and education, and a homecare nurse. She holds a bachelor's degree in biology from Binghamton University, State University of New York, and an RN degree from SUNY Broome Community College.

Ruffo and her husband Sam reside in Conklin. They have five married children and 14 grandchildren.