Have you noticed?  The winds of change are blowing in Albany.  The combination of the states fiscal crisis, the change in administration and NYSSBA advocacy have combined to create a series of unprecedented reforms for New York State school districts.  Far from being lumped in with the defenders of the status quo, NYSSBA is now recognized by state leaders as a true partner in the effort to make our schools more effective and efficient.  The results began last spring with the predictability of two year state aid funding.

It proceeded with reforming the states tax code to ensure the fiscal stability needed to rectify years of state aid decline, as well as freeing school districts and BOCES from paying millions of dollars in MTA expenses.  This past winter Governor Cuomo made NYSSBAs pension reform proposal his own.  After negotiating with the legislature, the enactment of Tier VI has established a whole new dynamic in future pension costs for our schools, with over half of those costs to be borne by the employee.

With the first of NYSSBAs Fiscal Reform Playbook agenda items now on the books, the state has adopted NYSSBAs state aid approach, as well as making good on its promise of predictability in two year state aid funding.NYSSBAs advocacy platform for state aid this year consisted of several key messages.

First, the state needed to return to its funding partnership with local taxpayers.  The historic 50-50 split between local and state revenues had fallen to barely a third of total revenue being supplied by the state.  We all know that the state had frozen aid and then instituted a massive aid cut.  What few of us have focused on is the fact that the state had previously cut even more (over $2 billion) in the year before last, but flexible federal aid had replaced it, minimizing the initial impact of the loss.  That federal aid is now exhausted, leaving a total loss of over $3 billion in state aid that is only now being addressed.

Second, after years of state aid decline, no district could afford the loss of funds spent in expectation of expense based aid reimbursement.  The promise of state aid for BOCES services, transportation, special education and construction costs had to be kept.  Loss of this aid would simply be too destructive to existing educational programs and services.

Third, new state aid beyond reimbursement must be targeted to those districts in financial jeopardy.  Caps on both state and local revenue (after years without state help) were not only having a disproportionate impact on high need schools, it was putting them out of business.  Not only students, but whole communities stood to suffer enormous hardship without a new approach.

Finally, competitive grants to improve effectiveness and efficiency are great incentives toward improvement.  They are not, however a valid or predictable replacement for promised aid.  State leaders listened to NYSSBAs testimony, letters, legislative meetings and to the hundreds of school board members who brought that message to their legislators.

Thankfully, both the Regents and eventually the state legislature and governor, agreed.  The recently enacted state budget restored funding for the reimbursable categories, while pushing the majority of new aid to those districts most in need and restoring most of the competitive grant funding to aid formulas. 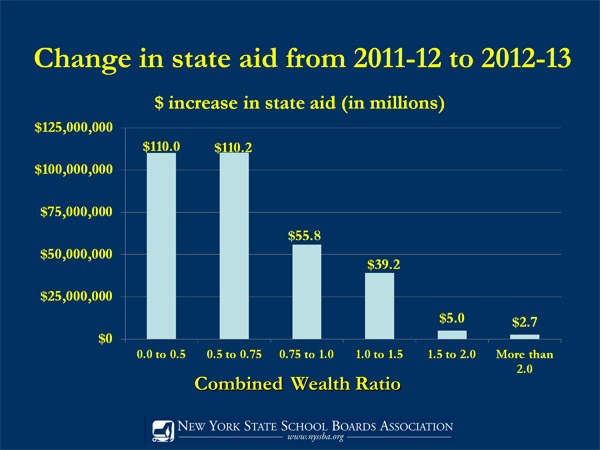 Fortunately, that wasnt the end of their response to NYSSBAs and your efforts.

THE REST OF THE LEGISLATIVE SESSION
WHERE ARE WE GOING AND WHAT CAN WE EXPECT?

Whether the bargaining chip has been legislative redistricting, rent control in New York City or governor-controlled budget extenders, much of the needed reform has thus far been tied to Governor Cuomos strong public support and even stronger bargaining position with legislative leaders.  The traditional carrots having largely been dispensed, the governor has only one remaining:  Legislative pay raises.  There is some question over whether this issue can be used for future leverage or whether the issue has already been included in negotiations for pension reform or budget legislation.  Whether or not the governor has any further leverage with the legislature will determine the success of additional reforms prior to the legislative elections in November.  Having already angered state employee unions over contracts without pay increases and pension reform that unions adamantly opposed, there is little chance that legislators will pass bills that include more changes opposed by those unions.

Fortunately, there are several NYSSBA legislative priority items outside of that realm.  Many of these reforms simply make sense, like using national purchasing cooperatives to garner nearly $200 million in annual savings for districts, allowing BOCES to fill board vacancies between elections or providing districts with additional audit flexibility.  There is certainly political momentum for further reform.  Yet, action in this legislative session may well hinge on local school budget votes next month.  If most budgets pass (using increases below the tax cap) legislators may well want to avoid goring any political ox prior to election.  If, on the other hand, a number of budgets are defeated, legislators will be hard pressed to justify capping both state and local revenue without providing the immediate, significant mandate relief they promised would accompany the caps.

NYSSBA and its coalition partners in Let New York Work will also use the remainder of the legislative session to set the stage for consideration of the fundamental reforms included in the Fiscal Reform Playbook.

The time between passage of the state budget and the end of the legislative session is sometimes referred to by the media as Albanys silly season for the number of questionable legislative proposals that are considered.  This year is likely to be no different and a number of bills are already raising concerns for school boards.

By producing top quality research directly relevant to legislative issues, by hosting summits and advocacy events on the days most pressing concerns and by working tirelessly with the public, school board members, coalition partners and state leaders, NYSSBA has become a highly visible and influential force for needed reform.  The fiscal crisis has placed unprecedented demands on local school districts and we know that you need NYSSBA more than ever.  Dedicated NYSSBA staff are turning your membership priorities into state policies that help your bottom line and your educational mission.  We do not take either your support or NYSSBAs increased influence in the legislative process lightly.  Look for NYSSBA to defend and promote sound policy for our schools throughout the year.  With your continued participation, NYSSBA will lead the way advancing academic achievement.

Governor Cuomo has vetoed 129 items in the state budget, but only 9 affect public education.  In passing the state budget, state leaders largely stuck to their self imposed cap of $805 million in new education aid.  However, they added bulleted aid for 62 districts with formula anomalies and a pool of nearly $30 million in additional legislatively controlled member item aid for districts in need.  Districts selected for these funds will need to be approved by a vote of the legislative house controlling the fund.  The Senate is in charge of a pool of roughly $20 million, while the Assembly will dole out $9 million.  None of Governor Cuomos vetoes affects either the bullet aid or the available pool of new funding.  The vetoes were largely directed at drafting errors, prior year appropriations or duplication within budget language.

In addition to the annual State Issues Conference and Lobby Day, a number of school districts and local school boards associations come to Albany to meet with legislators each year.  With conveniently located meeting space and knowledgeable staff to prepare you with the latest information, NYSSBA can help you maximize your meetings!  If you are planning an advocacy trip to our state capital, feel free to call on NYSSBA to provide you with space and staff to help you make the most of your meetings.  Knowing the legislative and political environment can make your meetings with local legislators more focused and productive.  NYSSBA can help you coordinate logistical arrangements and sharpen your message, as well as provide you the welcoming space you need to collect your thoughts.  You and NYSSBA, leading through advocacy!

Advocacy
Back to top