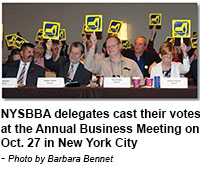 However, in a close vote, delegates turned down a third Common Core-related resolution to support the continued use of student performance data in annual professional performance reviews (APPRs).

"APPR is so badly flawed that the state needs to get its act together," said Emily Rogan of Huntington. "We don't oppose evaluations, we just oppose this plan."

Delegates directed NYSSBA to support the use of Regional Information Centers as student data centers with the caveat that RICs be legally designated to be educational agencies under the state Education Law.

Delegates also voted to support property tax cap relief for distressed districts, despite the fact that delegates who spoke against the resolution expressed the sentiment that all districts should get the same relief.

"In time we'll all be distressed districts," said Barbara Fraterrigo of Guilderland, who spoke against the resolution.

Countered Patrick Burk of Batavia: "We're all against the tax cap, but you have to stand up and take care of the least of yours. We want to protect all kids."

Along that vein, delegates passed resolutions that seek increased and sustained support and funding for both pre-kindergarten and full-day kindergarten. Some questioned the increased emphasis on pre-K, even as their districts struggle to fund kindergarten.

In one late resolution, delegates directed NYSSBA to seek state and federal help for districts in educating the influx of unaccompanied minors into the state.

"We need help yesterday," said Jeannette Santos of Amityville, to cheers from the audience. "We have to educate these children without money and resources."

In another late resolution, delegates voted to support legislation that would prohibit local boards of election from designating public school buildings as polling places without a school district's consent. "School districts should be able to pre-approve their schools as polling places," said Denzler of Little Flower. "It's about school safety."

The New Hyde Park-Garden City Park school board proposed the polling place resolution after an incident in which a school building went into emergency lockdown while part of the building was being used as a polling place. "When police entered the building, which was then still in lockdown mode, members of the public and the board of elections were found roaming in the hallways, and even in the basement, and were not in compliance with lockdown procedures," said board member Jennifer Kerrane.

With no discussion, the delegates directed NYSSBA to oppose state-funded and designated teacher bonus programs.

Delegates agreed to amend the NYSSBA bylaws to give members more flexibility in paying their membership dues, rather than strictly structuring them on a January-December calendar year.

In speaking for the bylaw change, Catherine Romano of Islip said, "I support NYSSBA and their services. If [school boards] don't all work together, then we'll die apart."

In all, the 279 delegates passed 10 resolutions, which will become part of NYSSBA's 2015 advocacy agenda and stay in effect as official positions for five years. The resolutions were presented by Resolutions Committee Chair Elise Antonelli of Valley Stream District 30.

In reviewing the resolutions process for the delegates, Executive Director Timothy Kremer said, "Your willingness to take a stand on these `front burner' issues defines school boards as the true advocate for students and authorizes your Association to be the strong, clear voice of public school leadership fully engaged on the front lines."

Delegates also elected a slate of officers to one-year terms for 2015. Lynne Lenhardt of the Bethlehem, Capital Region BOCES and Tech Valley High School boards, was elected to a second one-year term as president.

"NYSSBA has, and will always be, the resource I most rely on when it comes to the work of school boards," said Lenhardt. "It is our Association. NYSSBA exists to advocate, educate and inform us as school board members."

Reporting NYSSBA's clean audit for fiscal year 2013, Nespeca said: "We strive to be accountable to you, our members, in all aspects of what we do - including our financial reporting."