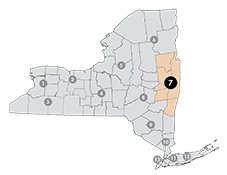 NYSSBA provides advocacy, information and training to school boards in support of their mission to govern the state's public schools. The NYSSBA board establishes policies to supervise, control and direct the business of the Association.

Lewis is married to Bradley Lewis, an economics professor at Union College in Schenectady.