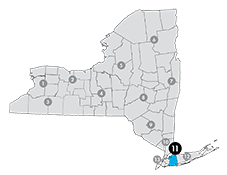 Schoen has been a member of the Nassau BOCES board since 2009. He was a member of the Baldwin Board of Education from 1996 to 2012, serving terms as president and vice president. He is also a graduate of Baldwin High School.

Schoen has been a long-time presenter and presider at NYSSBA annual conventions and New School Board Member Academy. He is a member of NYSSBA’s State Legislative Network and the National School Boards Association’s National Advocacy Institute. He was a NYSSBA Ambassador for public education.

Schoen is President of the Baldwin Foundation for Education, a member of the Nassau BOCES Educational Foundation, Sons of American Legion, Amityville Highland Pipe Band and is an inductee of the National Wrestling Hall of Fame.

Schoen is retired from BP (British Petroleum). He has a bachelor of science in mass communications from Minnesota State University Moorhead.

Schoen and his wife Ann have four children and 10 grandchildren.