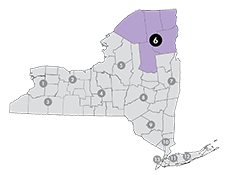 Rogers has been a member of the Malone Central Board of Education since 2002.

Rogers taught high school biology for 32 years at the Malone Central School District before retiring in 2002. During his career, he chaired the science department, and helped develop and implement new curricula based on New York State Learning Standards. He was a member of the State Biology Mentor Network.

Rogers is a councilman and a former supervisor for the Town of Bellmont. He is a member of the Sunmount Development Disabilities Services Board of Visitors. He served on New York State Forest Resources, Taxes and Profits Issue Study Committee. He was chairman of Franklin County Solid Waste Management and Authority Board.  He is a member of the board of the Franklin County Historical and Museum Society.

Rogers earned a bachelor's degree from SUNY Plattsburgh and completed a year of graduate work at the University of Vermont.

Rogers and his wife Nancy have three married sons and nine grandchildren.