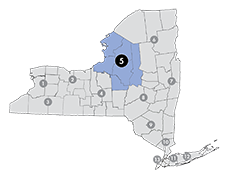 Miller has served on the Herkimer-Fulton-Hamilton-Otsego BOCES Board of Education in 2002, three years as president. He was on the Mount Markham school board from 1993 to 2005, serving as president for six years.

Miller has represented Area 5 on NYSSBA’s State Legislative Network and the National School Boards Association’s National Advocacy Institute. He is also a member of the Oneida-Madison-Herkimer School Boards Institute.

Miller and his wife Julie live in West Winfield. They have three grown children.