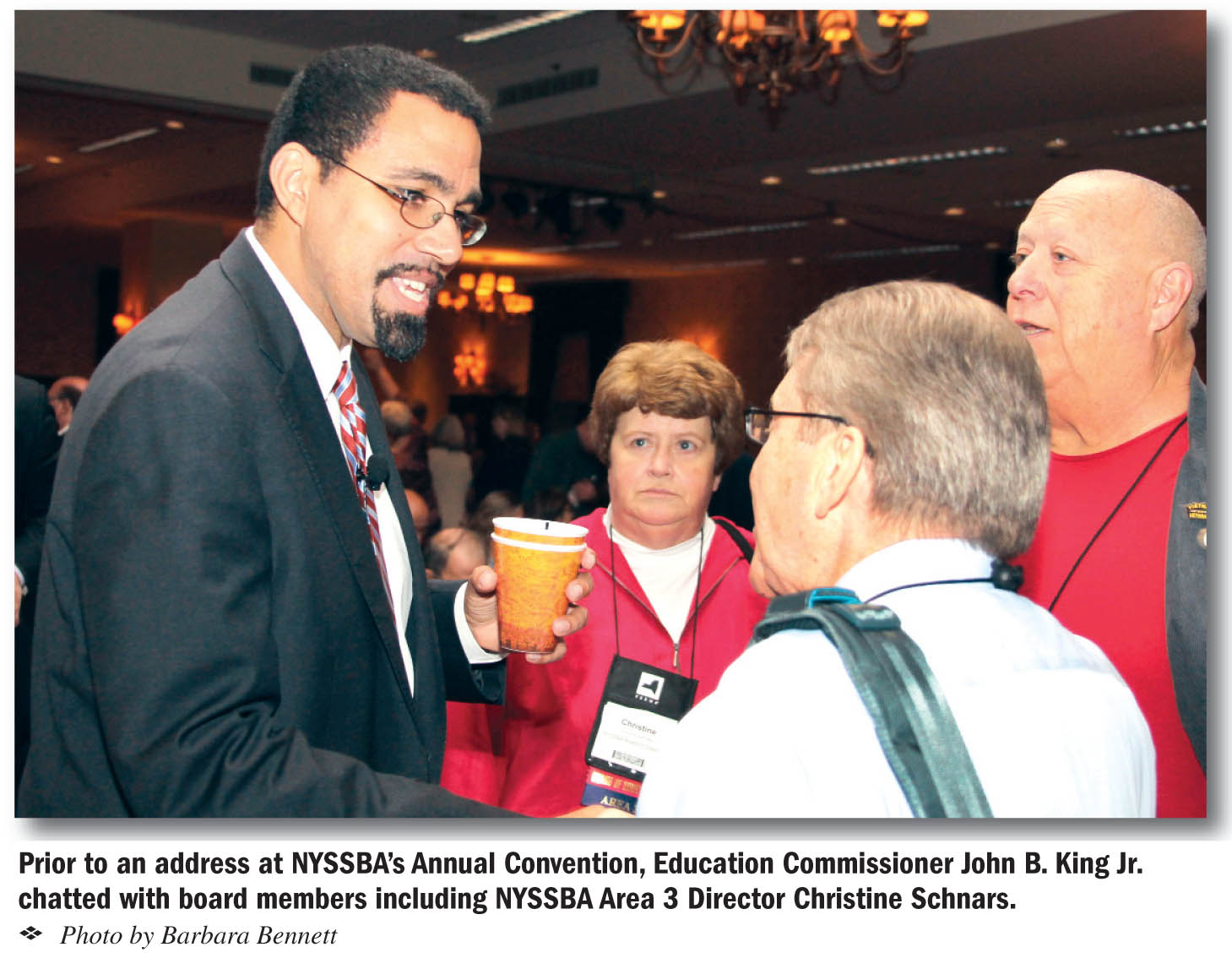 Amid continuing controversy over the Regents Reform agenda, state Education Commissioner John B. King Jr. told a standing-room-only crowd of more than 1,100 at NYSSBA’s 94th Annual Convention & Education Expo that he has been impressed by improvements in classrooms throughout the state.

In travels to nearly 40 school districts this fall – from Amherst to Port Chester and Copenhagen to Harlem – King said he has seen teachers improving their instruction and students more engaged in their lessons as a result of practices encouraged by the Common Core learning standards.

“I am incredibly optimistic about where we are in this work,” the commissioner said – though he acknowledged “it is hard.”

King said, “There’s no question that the work of implementing higher standards, raising the bar for students, the work of transforming the way we evaluate teachers and principals – all of that is hard work and it’s challenging work. But I’m incredibly optimistic because of the leadership in this room.”

King praised local school leaders for committing resources to professional development for teachers and administrators and placing a high priority on spending that supports instruction and student opportunities, even as they grapple with tight finances.

Pointed but polite questioning by school board members and a superintendent at the NYSSBA session contrasted with a raucous mid-October forum at the Spackenkill school district in Dutchess County.

“Welcome to our world,” said one school board member, referring to the outcry over testing.

King cancelled remaining forums sponsored by the state PTA but has begun a new circuit of 12 revamped Common Core forums, which are coordinated with state legislators and local leaders. In addition, four forums are planned with public television stations around the state.

“I’m committed to listening and creating opportunities to engage with folks, and I’m comfortable with tough questions and difficult exchanges,” King told the NYSSBA Convention crowd. “What I don’t think is constructive is when meetings devolve into heckling and screaming …People yelled epithets as part of their heckling. It was not a conversation that was going to be productive.”

The crowd erupted into a sustained applause when King, a former high school social studies teacher, declared: “Democracy is messy, but it shouldn’t be chaos and it should not be hostile.”

Several questions from board members focused on dissatisfaction with the level of preparation that teachers have had for teaching the Common Core.  King stressed that model curriculum modules posted on the state’s EngageNY website are not mandates or scripts for teachers but are intended to help provide professional resources and guidance for educators who want them. Curriculum decisions should be made locally, he said.

And though some have criticized the EngageNY material as too advanced for the grade levels recommended, he said the curriculum pieces are developed from material with long records of success and backed by research. Material that may seem complex for very young children helps expose them – particularly when read aloud by teachers or parents – to rich language and ideas that help them build vocabulary and understanding, he said.

King drew more applause when he encouraged board members to press state lawmakers to put concerns about sufficient school funding “front and center” in the coming months and to advocate for universal pre-kindergarten. “Pre-K is not universal, and it should be,” he said.

He was also applauded as he outlined efforts by his department and the Regents to reduce or revise some requirements and common practices in testing. (See story page 3.)

As she introduced King, Regents Chancellor Merryl Tisch left little room for doubt that he and the bumpy educational reform movement underway both retain her support.

“We are committed to hearing, adjusting, listening, cooperating and collaborating,” Tisch said, “but I think we all have to agree that the implementation of the Common Core is not a question any more of ‘if.’ I think now we need to be fully engaged now in the ‘how to.’ ”