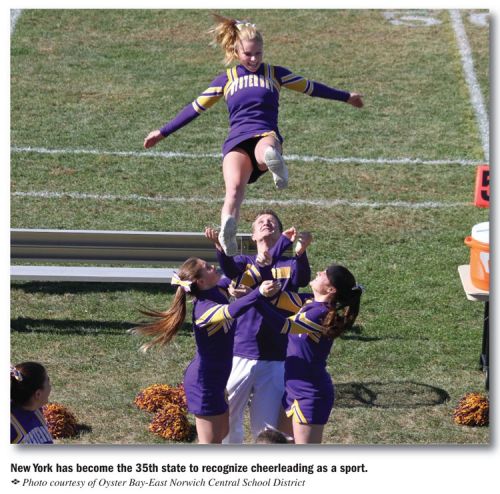 The athletic style of cheerleading that features human pyramids, tumbling and other stunts has become an official high school sport in New York.

The Regents unanimously approved the new interscholastic sport “competitive cheer” at their April meeting. They acted on a recommendation from the New York State Public High School Athletic Association (NYSPHSAA), which has studied the matter and encouraged the change for several years.

The official status clears the way for NYSPHSAA to enforce safety rules, set standards for competition and, with the State Education Department, regulate the training and certification of competitive cheerleading coaches. The organization hopes to stage state cheerleading championships, similar to those held for basketball and football, within two years.

“Both competitive and traditional cheers are very important and we support both traditional and competitive cheers,” said NYSPHAA Assistant Director Todd Nelson. “The concern was that, when you get into the competitive side, you need to have the safety regulation and the rules in place so it can be done safely.”

In a brief presentation to the Regents’ P-12 Committee, Deputy Commissioner Ken Wagner said the recommendation was sparked by “the changing nature of cheer.”

“It is much more athletic, much more complex and, quite frankly, much more risky,” Wagner said.

Some 34 other states already recognize cheerleading as a sport, Nelson said.

Competitive-style cheerleading already is popular in some parts of New York – most notably in Section XI, which is in Suffolk County on the eastern end of Long Island, and in Section V, which covers several counties in the Genesee Valley/Finger Lakes region. Cheerleading squads from those NYSPHSAA sections regularly participate in regional competitions and travel to high-level championship meets in other states.

But because cheerleading was not formally recognized as a sport until now, the State Education Department and NYSPHSAA had little authority to set standards for training and certification of coaches or for safety precautions during practices and competitions.

Now, competitive cheerleading coaches will be required to have the same training and certifications as other high school coaches in New York, including training in cardiopulmonary resuscitation, first aid, concussion management, child abuse reporting and the Dignity for All Students Act.

In a report issued in February 2011, NYSPHSAA’s Ad Hoc Committee on Cheerleading recommended that New York adopt most of the standards and regulation set by the National Federation of State High School Associations in its Spirit Rules Book.

Those rules include a minimum of 15 practices for a squad doing stunts or tumbles in a competition or performance and 13 practices for any individual member of the squad.

Some local athletic directors contacted by On Board said they expect to receive more information soon that will help them determine what the impact will be, if any, on their programs.

Kevin Trentowski, high school athletic director for Oyster Bay-East Norwich in Nassau County, said his district’s cheerleaders do not currently participate in competitions but they do perform some stunt-like maneuvers that could trigger the coaching certification requirements.

“I think that any time you have an opportunity to certify somebody with safety training, to have that would be a wise decision,” he said.

“We’ve recognized cheerleading, more or less, as a sport in Section V for years,” said Section Chairman Ed Stores, who also welcomes the new official status. “We really want our cheerleading coaches to be certified, and now they have no choice.”

Stores said there’s no doubt that cheerleading, as it’s done in some districts, is a sport. “It’s more gymnastics than it is cheer,” he said. “The things they do are amazing. Given what these kids are doing these days and the athleticism it takes – yeah, it’s a sport.”

It will be up to the State Education Department to set the number and duration of seasons for competitive cheerleading, Nelson said. If SED approves both fall and winter seasons, NYSPHSAA will need to decide whether students will be able to participate in both. That isn’t typically permitted for other sports in New York.

It’s expected that any state championship event would take place during the winter season. Some NYSPHSAA sections also have regional competitions that take place in the fall.

Co-ed cheerleading squads, which would include teams with even one male participant, will be able to compete only against other co-ed squads in competition, Nelson said. He said “the vast majority” of squads now active in New York, however, are female-only.

Although competitive cheer will be categorized as a girls’ sport in New York, it will not be eligible to fulfill Title IX parity requirements, NYSPHSAA officials say.

A 2012 federal appeals court ruling in a case involving Quinnipiac University determined that colleges cannot count competitive cheerleading as a sport for the purpose of complying with Title IX, the 1972 law that mandates equal opportunities for men and women in education and athletics. That case stemmed from an attempt by the college to eliminate the women’s volleyball program and replace it with competitive cheerleading.