In any generation, the social shoals of youth - especially in middle and high school - are treacherous for many students. Figuring out where one fits in the social hierarchy is a classic task and seldom an easy one, according to psychologists.

Whether a student feels popular among his or her peers no longer depends on who sits at what table in the lunchroom or what verdict peers render about one's shoes or outfit. Today, experts say, social status mostly plays out in cyberspace.

"At the middle level, kids start to judge themselves by their social media platform," said Karen Tesik, middle school principal in Rockland County's South Orangetown Central School District. "Social media is who they are. They've thought of 'popularity' by how many followers they have."

"The term 'friend' is used very loosely among children," said Andrew Livanis, chair of the Department of Counseling School Psychology in the School of Education at Long Island University-Brooklyn and president of the New York Association of School Psychologists. "Social media is constantly talked about."

Social scientists are trying to measure how young people's obsession with social media affects their mental health. In November, a study by researchers at San Diego State and Florida State universities revealed that teens who used electronic devices, including smartphones, for at least five hours daily - that's 19 percent of teens surveyed in 2015 - were 70 percent more likely to have suicidal thoughts or actions than those who reported one hour of daily use.

The study also noted a sharp increase in signs of depression among girls in grades 8, 10 and 12. 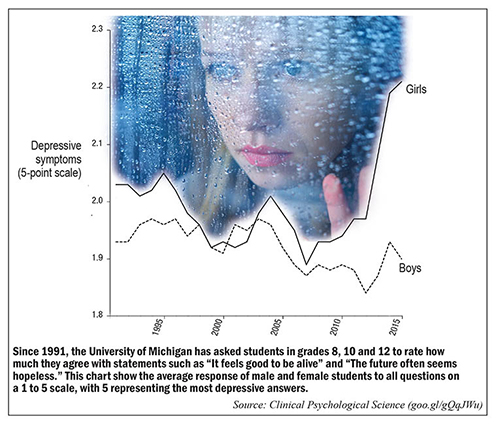 One bright spot: "Time spent on homework was negatively correlated with depressive symptoms," according to the study, published in the journal Clinical Psychological Science. In other words, kids who study a lot are less likely to report depressive thoughts. Also correlated with lower levels of depressive thoughts: teens who spend more time engaged in face-to-face social interaction, sports and exercise, reading print media and attending religious services.

When popularity is quantified by "likes" on social media

Psychologists and school counselors say a given teen's level of social anxiety often has a lot to do with their satisfaction with their online persona. A young person may feel second-rate after viewing other students' carefully curated "perfect" photos of their "perfect" lives.

For instance, a student with lots of friends on social media might post an image of herself with two or three other girls - her "besties." As a teenage girl scrolls through her feed, she may see dozens of such photos - but none of herself.

"After hours of scrolling through Instagram feeds, I just feel worse about myself because I feel left out," Caitlin Hearty, a high school senior in Colorado, told the Associated Press. She helped organize a "get offline" campaign in October.

"Teens are playing to an 'imaginary' audience," according to Eileen Kennedy-Moore, a Princeton, N.J.-based clinical psychologist and author of Growing Friendships: A Kids' Guide to Making and Keeping Friends, and professor for a Great Courses class titled "Growing up Social in the Digital Age."

"Online popularity is measurable," Kennedy-Moore told On Board. "Kids are drawn to it because of it being quantifiable. ' Social media gives immediate and quantifiable feedback. There's pressure to constantly do more. It's relentless, and feels like never enough."

On social media, there are haves and have-nots in terms of followers, "likes" and other indicators of popularity.

Odds are kids are not going to feel good about these indicators, because "popular" kids are really an elite group. Only 9 percent of students in grades 4 to 9 are considered both attractive (that is, possessing valued characteristics) and well-liked, according to a study that involved 4,541 students in 153 classrooms in the U.S. and Israel, and published in the journal Social Psychology of Education.

Does social media create new psychological pressures on children that affect them in school? It's more a matter of old pressures taking a new and powerful form, according to school counselors.

"It's not so much seeing the climb for popularity as kids looking for a niche to fit in," said Michele Rogala, a middle school social worker in Skaneateles. "Sometimes there's drama because the students don't understand that their perceptions may not be accurate."

But social media does change things. For instance, whatever conflicts arise at school, they often continue on social media once the students are at home, said Chris Viggiano, a counselor at Skaneateles Middle School.

Some students are adept at using social media to send messages of approval or disapproval (which can be as simple as liking or not liking a photo). Therefore, social media can amplify less popular students' sense of being socially excluded, counselors say.

And students with no internet at home feel like they live on Pluto. "There are "kids who come in and say, 'I'm not connected. I'm excluded,'" Viggiano said. "Their perceptions are skewed. We have to help them reframe the situation."

School officials say their role is to try to teach young people to put things in perspective and encourage kids to interact face-to-face with peers. Techniques include one-on-one counseling, small group work, curricular units and outreach to parents.

A team consisting of the principal, a school psychologist and a guidance counselor work with students who ask for help or are referred by parents.

"We run small group counseling sessions and individual counseling sessions to focus on social skill development when necessary for students identified as needing more intensive guidance in these areas," Tesik said. "The goal is to help students manage their desire to fit in and understand what social success really is."

Superintendent Kenneth Slentz of Skaneateles noted the district has recently embarked upon a policy review of social media. That "gives us an opportunity to educate about the advantages and disadvantages of social media. With eighth- through 12th-graders, we need to look at what is really going on. The biggest challenge is equipping parents with the knowledge of Snapchat, Instagram, Finstagram." A Finstagram, or "finsta," is a fake Instagram account that is typically used by girls to post ugly, funny or embarrassing photos to followers they consider their best friends.

Experts say providing teens with an understanding of what friendship really means is a key task for parents and educators. Young people need to know how to cultivate the friends and friendships they want, and that may entail de-emphasizing some relationships to pursue others.

Kennedy-Moore suggested asking questions such as:

"There's no substitute for face-to-face interaction and just being together," Kennedy-Moore said. "Electronic communication is a big part of kids' lives. Boundaries are really important and parents need to help set boundaries . Schools can be a voice in helping kids to gain perspective."

"We need to stop thinking of smartphones as harmless," said Jean Twenge, a psychology professor at San Diego State University and lead author of the study on suicide rates and social media use. "There's a tendency to say, 'Oh, teens are just communicating with their friends.' Monitoring kids' use of smartphones and social media is important, and so is setting reasonable limits," Twenge told the Associated Press.

Editor's Note: NYSSBA will hold a Mental Health Summit on March 15 on Long Island. For a PDF of this article (or any On Board article), email editor@nyssba.org.